Fearn Godfather by the gentle giant Dakota of Upsall, was used briefly before we sold him as a two year old for 10,000gns in Stirling 2015.

In hindsight maybe we shouldn’t have sold him, we did swither at the time but bills need paid and off he went, when Coldrochie decided to sell we went to view him pre-sale and thought that buying him back was worth considering.

We bought him back at their dispersal and are delighted with his progeny, they are very easy fleshing stylish cattle which are easily calved and quick to their feet, he is a trait leader for 5 individual traits and is amongst the highest bulls in the breed on all three indexes.

To view his full pedigree and up to date EBVs click here.

Semen is available from Fearn Godfather at £40 per straw, with a minimum order of 3 straws. For more information or to order semen please email admin@fearnfarm.com

Other semen available for sale include:

Fearn Elmer priced at £30 per straw, to view his pedigree click here.

Podehole Fenman priced at £25 per straw, to view his pedigree click here. 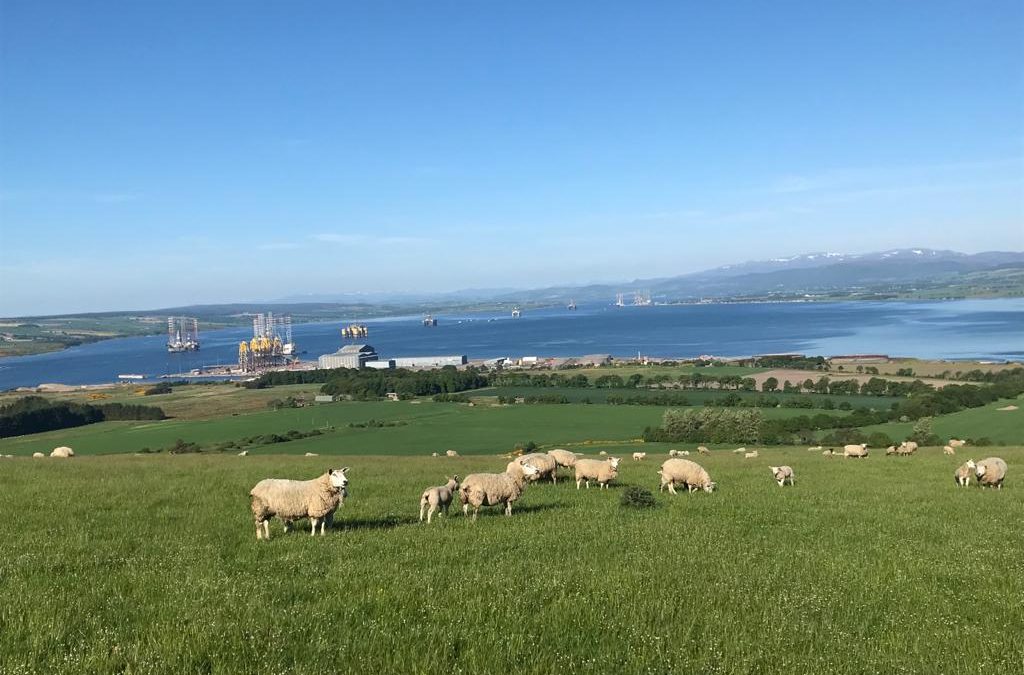 Lambing is certainly looming large at Fearn, our stud (those we breed our rams from) ewes are due on April 1st and with our crossbred ewes hot on their heels on 18th April its going to be a busy month.

Our team which is a mixture of full time staff members, family and seasonal staff are ready and looking forward to the challenge of lambing both inside and out at Fearn and Scotsburn where we contract farm for R W Durham and partners.

Over the past few years our system has evolved from one which relied heavily on bought in concentrate feeding to one which has grass and forage at its main driver. We still use some hard feed for those ewes lambed inside but that’s now part of a ration mixed in our tub feeder which basically mixes various ingredients including silage, wheat dark grains and home grown oats and barley.

We also use a little liquid feed for triplets and quads and we find that our ewes are more settled they don’t have to rush to feed twice a day as they used to and eat little and often to satisfy their appetites.

In an ideal world we would lamb everything outside at grass but being able to take higher value ewes and those carrying multiples inside makes sense, predators and a bitter east wind can make lambing a real challenge at Fearn.

Over the past twenty years we have taken steps to improve shelter around the farm and we now have a network of hedges providing much needed shelter and wildlife corridors for a wide variety of species some of which we see on a regular basis on our daily rounds.

For anyone passing the farm on a regular basis at lambing time they will see the numbers of new born lambs increasing on a daily basis and often these lambs are fresh which means just born.

Sometimes we get concerned phone calls from members of the general public that our sheep are lambing in the field, this is quite natural, our team tour the fields regularly during daylight hours and assist where necessary.

Ideally ewes will get on with things themselves and lambs will get up and suckle quickly without assistance, watching this happen gives us immense satisfaction its one of the highlights of our job during the spring.

Over 300 online bids were placed during an on-farm breeding cattle sale, hosted by Fearn Farm, Ross-Shire on Friday 22nd January 2021.

The sale which included beef shorthorn bulls, in calf heifers and maiden heifers reared by the Scott family, was the first 100% cattle sale in Scotland using the innovative Yourbid system. Developed by a farming family in New Zealand to run livestock sales during the Covid-19 lockdown, the transparent bidding model allows all lots to be visible simultaneously, helping establish relative market values.

Nine two-year-old beef shorthorn bulls sold to a top of £9600 for Fearn NC 500 selling to Gill and Co, Brucefield, Portmahomack with his half-brother Nonu just behind him at £9400 to Harry Strawson, Hexgreave Estate, Nottinghamshire, whilst another, Nevis sold at £7600 to Antrim Estates, Glenarm, Northern Ireland.

All three of these bulls were by the £20,000 Fearn Godfather whose females and semen were also in demand selling to a top of £5100 for Fearn Isobel to George Shanks, Northern Ireland and £4050 to Eric Evans, Wales, whilst semen hit £55 per straw on four occasions for lots of 5.

Fearn Elmer also made his mark in the sale with sons selling to £6300 for Fearn North Star to the Green family, Corskie whilst an unregistered bull made £5300 again to Gill and Co Brucefield.

Three-year-old bulls sold to £4400 for the favourite Fearn Mey who heads north to Mackintosh, Glengolly in Caithness.

For John Scott, who has been organising on-farm ram sales since 2012 with his wife Fiona, the Yourbid system has allowed them to continue selling their stock whilst adhering to lockdown regulations.

“This format is a fantastic solution for the challenging times we live in at the moment and offers a long-term alternative method to selling livestock with many benefits.

“We have dreamt of having our own cattle sale now for some time and although we had envisaged it being more of a social occasion, the day worked well and we have been able to sell cattle all over the UK and Ireland in a clear and transparent manner.”

The sale included Luing bulls and heifers which, on this occasion, did not sell but according to John, it was just not the right time.

“The Shorthorns exceeded our expectations, and we are delighted to see our genetics travel across the UK. Unfortunately, it was too early in the season for the Luing animals, however, one of the benefits of these sales is we can be confident in our high health status as the animals have not left the farm.”

Giles Henry of Oakwood Mill, Selkirk shares why he purchased a Luing bull from us in May 2019

Giles upland organic farm of 210 ha in the Ettrick Valley has a pedigree Luing herd, calving on the 1st April on wards with heifers calved at 2 years of age. With a 6 week bulling period he requires stock that has high fertility, calve without intervention and flesh easily. Capacity to forage well is also key to produce progeny that thrive on a forage based system.

Giles looks for a Luing bull with “good breed characteristics, good depth so has gut capacity, hill bred, and good locomotion”. The animal also needs to have “good temperament and feet, and not been pushed on”. Animals from a “Hi health status” is also key criteria when selecting stock for Giles.

Giles informs us why he chose to purchase from us, “bred to traditional Luing type” and if he has lived up to his expectations. “He has been everything that we expected, easily worked with.  He is one of these types that you hardly ever see working.  No faffing about he just gets on with the job. His calves popped out with no difficulties, strong types, up and straight in to suck”. This year Sutherland warlord “had a batch of 32  bulling heifers and 1st calvers, all in-calf in a 6 week bulling period”.

Thank you for sharing your customer story with us Giles, we really do love to see and hear how our customers get on with their chosen breeding stock. Head to our bidding site https://www.yourbid.org/the-luing-and-the-short-of-it to view our Luing bulls and heifers we have available for sale.

We recently welcomed Redhill Priddy to Fearn, he’s a Beef Shorthorn bull calf and was bred by Brenda Wear who lives in Somerset near the village of Priddy and hence the bulls name.

To be fair to the young fella its been quite an experience for him, separated from his mum at eight months of age before being transported 573 miles north to us but he’s settling in really well. He will spend the next couple of months in our isolation area which is something we always do as part of our health plan when bringing new animals into our herd. This area has a view over the cattle shed and farmyard and catches the winter sun so its not a bad place to spend his early days on the farm.

Seeing as he’s such a handsome young man Jimmy our bull guru will halter train him just in case we need to show him or collect semen from him when he’s older and one of the benefits of that process is that he will become even quieter than he already is.

We have sometimes been asked what do you look for when buying a new bull, we look at many things including health status, estimated breeding values, structure and correctness and of course breeding, who are his parents and will he breed like them?

In this case it was all about the breeding, Priddy has an outstanding pedigree with proven genetics on both sides, his mum has two famous grandfathers in Tofts Romany and Sutherland Bundaberg and his dad is Bemore Fuel Injected V12 and Australian bull born in the year 2000 which had semen sent to the UK.

I first saw progeny from V12 when I visited the Glenisla herd owned by the Gibb family near Glenisla and amongst others saw a tremendous red son named Glenisla Vagabond running with highland cows.

In hindsight I maybe should have tried to buy him but bought semen from his father instead and inseminated a few cows with Fearn Abraham, sold for 5500gns and Fearn Nesta A being the resulting progeny.

Nesta A bred Fearn Elmer possibly the best bull we have bred to date so as you can imagine we are very excited that Priddy has arrived and look forward to sending him out to work next summer. We will of course keep you updated and share photos and information about him as he grows up.

We are a large mixed farm in Angus, looking for someone for carting grain, cultivating and other work from mid July to the end of September/mid October

Please message me to enquire and or for more details.